Hello again, how are you all doing? I apologize for the long abandonment from this blog. Long story short, I got a bit swamped and lazy.. then it just kind of spiralled from there. Plus I started using Instagram in the fall which added to the “lazy” factor of not blog posting. Once I got my new phone, it was so much easier to just post pictures straight from the phone.

But, with that being said, I was actually still using this blog ‘privately’ to keep track of recipes / food that I was making. Since I’m in practicum right now and have a bit more free time, I thought it would be fitting to post some of the recipes that I’ve made since the summer. Most of the pictures that I will be using are already on Instagram. If you want to see only pictures, check out my Instagram at: ja_wong.

For those who are interested, I thought I’d give a brief run down on what has happened since the summer. At the end of August, I visited Toronto and NYC for the first time. Travelling companions included my brothers, C, and my cousin. For the most part, it was a really fun trip – would love to go back to NYC someday. It was amazing but I could never live there, too fast-paced for me. From Sept to Dec, I was back in full-time classes at BCIT.. In other words, not too much happened during this time. In terms of non school stuff, I continued to bake, learnt basic knitting, and got a little into card making.

I also finally graduated from UBC in November with a B. Sc. It was a long time coming, but I can finally say that it was worth the struggle. Its one of the few things in my life so far, that I’m surprisingly proud of =]

Not much happened in December, just the usual busy family-oriented winter break. Then once January rolled around, I started my 3 months of practicum, which I’m still doing now. I’m sure I left out a bunch of stuff but that was basically the gist of what has happened since the summer.

And now, onto the food talk. This was a recent project that I just completed today. After this post, I plan to post some older pictures/ recipes that I’ve made since the summer.

Anyways… last week, C asked me to make some decorated sugar cookies for his work potluck. They couldn’t be too generic or too complicated though… we finally agreed on a police cruiser.

I initially had my doubts because they sounded kind of complicated, but after googling for ideas, this is what I came up with. 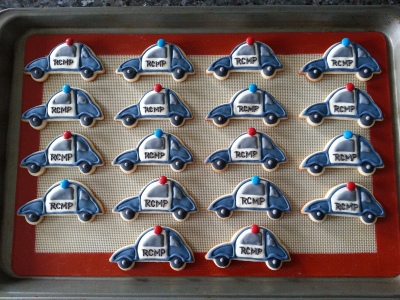 Really happy with how they turned out, plus they’re super cute. I could totally see these cars at a kid’s birthday party or something.

He’s bringing them into work on Wednesday.. I hope they like them =]

Some extras – Hearts and Teapots 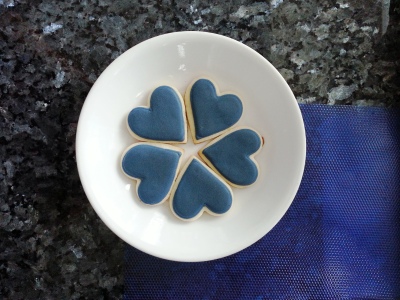 Wasn’t a fan of the teapot cutter… just didn’t find them very cute. Maybe it was the icing design.. who knows.

Thank you so much to both old and new readers for continuing to read this blog. Talk to you all soon.