Tonight, I’ll be going to a potluck with a few girlfriends, and these are the treats that I’m planning to bring (in addition to drunken gummies =D). The last potluck we had was around Christmas I think, so we were definately overdue for another one.

Remember I mentioned I wanted to make some chicks with attitude in my ‘spring chicks’ post?Well… here they are! I think they actually turned out pretty cute… cuter than the turtles anyways lol I only put brows on 5 of them and kept the others still looking cute. 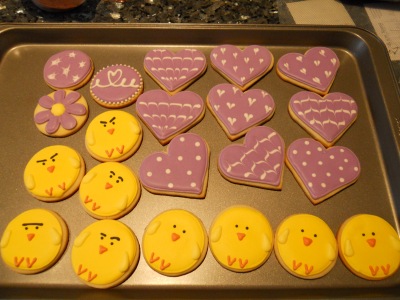 Also threw in some random heart cookies with different designs. Originally, when I was baking the hearts, I tried to shove lollipop sticks into them… (thought it’d be a genius idea to bring them as a cookie bouquet to the potluck) but they looked really lumpy and weird around the middle and I didn’t want to take a chance and ruining/ wasting the cookies. So I ending up taking the sticks out and baking the cookies normally, but will have to try that again next time. Thinking maybe I didn’t roll the dough thick enough to support a lollipop stick….

Not sure why, but I love the ‘one brow raised’ look the best lol